At the 2010 Kentucky Historical Society awards celebration, Sgt. Maj. (Ret.) José Rosario, a museum volunteer, received the Award of Merit for "The Recognition of Civil War Congressional Medal of Honor Recipient Henry Mattingly." Rosario was mainly responsible for the research that led to the proper recognition of Henry Mattingly. For more information about Mattingly and Rosario's work see this page and this page. 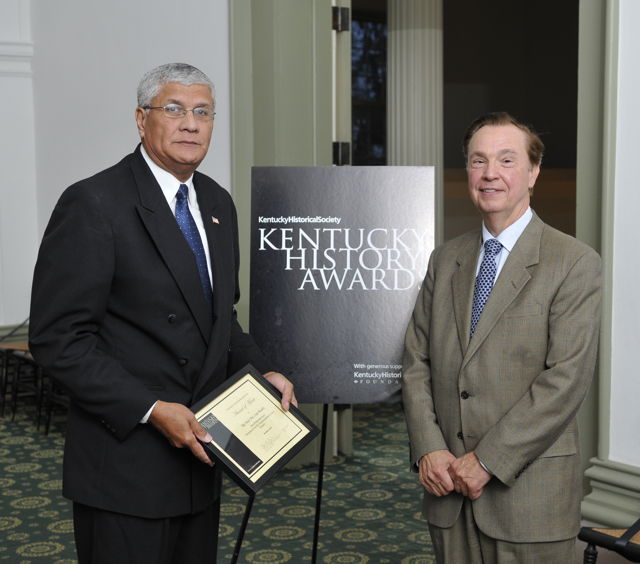 In 2009, Bullitt County Genealogical Society editor Betty Darnell won a certificate of recognition for her work producing our society quarterly, The Wilderness Road.

Charles Hartley was awarded a certificate of merit for his books on the 1917 Train Wreck.

And our fantastic Cemetery Documentation Team, was recognized as Volunteer Group. That group, by the way, consists of Chairman Daniel Buxton, Secretary Lynn Eddington, Barbara and Ken Bailey, Jimmy Cash, Judy Richardson, Bob Cline, and advisers Betty Darnell and David Strange. Each member of the team was given framed copies of the award, and copies of all three awards will be proudly displayed on our museum office wall. 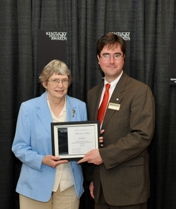 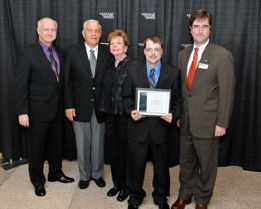 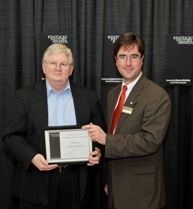 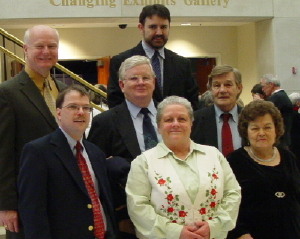 First was an Award of Merit honoring all of the museum's volunteers for their tremendous efforts. Next, the newsletter produced by David Strange was given a Certificate of Commendation, an award that promotes the newsletter as a model for other organizations to emulate. Finally, the museum's web site was presented with a Certificate of Commendation as well.

Also receiving an award was the Pioneer News which was honored with the Media Award for its excellent coverage of the museum's work as well as other stories about the county's history.

To see the official announcement, visit this page at the Kentucky Historical Society web site.

The Bullitt County History Museum, a service of the Bullitt County Genealogical Society, is located in the county courthouse at 300 South Buckman Street (Highway 61) in Shepherdsville, Kentucky. The museum, along with its research room, is open 9 a.m. to 4 p.m. Monday, Tuesday, Wednesday and Friday; and from 9 a.m. to 6 p.m. on Thursday. Admission is free. The museum, as part of the Bullitt County Genealogical Society, is a 501(c)3 tax exempt organization and is classified as a 509(a)2 public charity. Contributions and bequests are deductible under section 2055, 2106, or 2522 of the Internal Revenue Code. Page last modified: 08 Sep 2018 . Page URL: bullittcountyhistory.org/kyhistawards.html